The Statement of Principles for Consumer Involvement in Cochrane 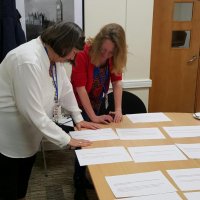 Consumer involvement in Cochrane – the Statement of Principles

The purpose of consumer involvement in Cochrane

Cochrane is a global independent network of researchers, professionals, and people interested in health, including healthcare consumers. Cochrane's healthcare consumers are made up from a wide range of people, including patients (or people with personal experience of a healthcare condition), health and social care service users, care-givers and family members. Also included are people who represent or are advocates for patients and carers. What unites them all is their search for high quality, unbiased information about health conditions and treatments.
Consumer involvement is vital to Cochrane’s work as it:

(i)    promotes transparency, accountability and trust in the way that research is produced;
(ii)    results in evidence that addresses consumers’ needs, reduces waste in research, improves the translation of research into policy and practice, and ultimately leads to improved benefits for health systems and outcomes for patients;
(iii)    is consistent with current health research approaches and is expected or mandated by our funders, partners and consumers.

The value of consumer involvement

GOAL 1: Producing evidence
Consumers can influence the way research is planned and carried out, including by nominating and helping to prioritise Cochrane review topics; helping to frame research questions and identifying relevant outcome measures; evaluating the impact of evidence; and participating in Citizen Science such as Cochrane Crowd. There is also an opportunity to work alongside researchers and clinicians to co-produce research, including participating as researchers and co-authors.

GOAL 2: Making our evidence accessible
Consumers can comment on systematic reviews, protocols and plain language summaries, ensuring that reviews address questions that are important, relevant and understandable. Consumers can work with authors, Review Groups, Fields and Centres to promote Cochrane evidence and decision making by helping to develop innovative ways of presenting evidence, telling their own stories or speaking on behalf of other patients, and promoting evidence through their networks, partner organisations and social media.

GOAL 3: Advocating for evidence
Consumers can help promote evidence-based healthcare in general and Cochrane evidence through campaigning, explaining and sharing knowledge about evidence-based practice, research and evidence with other consumers, patient organisations and networks.

GOAL 4: Building an effective & sustainable organization
Consumers can contribute to the leadership and governance of Cochrane at national and international levels by being part of Review Groups, Fields and Centres, by serving on the Cochrane Council and by putting themselves forward for election to Cochrane’s Governing Board. Consumers can be recruiters, and champions for consumer involvement, as well as mentoring and sharing their knowledge and expertise with other consumers. They can help to develop Cochrane resources and practice, as well as building and sustaining partnerships and alliances with groups that can disseminate and promote Cochrane evidence.

The guiding principles of consumer involvement

Cochrane’s work is based on  its 10 key principles. In addition, consumer involvement in Cochrane will be guided by the following: equity, inclusiveness and partnership.

Equity
Cochrane recognizes that consumers altruistically volunteer their time, experience, knowledge and skills and it acknowledges and values the contribution of consumers equally with all other Cochrane collaborators and members. Equity requires that consumers – as with all collaborators, supporters and members – enjoy similar opportunities for meaningful involvement in Cochrane’s work, clarity of expectation for that work, and adequate support to do that work in the form of effective communication, induction, training, and reimbursement of expenses (where applicable).

Inclusion
Cochrane recognises that consumer involvement is vitally important to the process of governance, and the production and dissemination of Cochrane evidence. Our consumer and membership base should be as representative as possible of the population that Cochrane seeks to serve. Cochrane recognises and respects the diversity of its consumer contributors, values people’s differences in the way they contribute, and acknowledges that promoting an inclusive approach to their involvement means that consumers can contribute to their full potential.

Partnership
Consumer involvement in Cochrane is a key part of the production of Cochrane evidence. It can vary in extent and depth, from reviews which are guided by the contributions of consumers, to those where consumers control aspects of the review in which their lived experiences give them particular expertise (co-production). Consumer involvement adds significant value to reviews and Cochrane seeks to maximise these contributions through active consumer involvement in the governance of the organisation and the entire review and dissemination process.  Cochrane aspires to develop its partnership with consumer volunteers throughout the whole research cycle.

Cochrane’s commitment to its contributing consumers

Approved by the Cochrane Board July 2017

How we wrote the Statement of Principles

This Statement of Principles for Consumer Involvement in Cochrane was approved by  the Cochrane Board in July 2017. It was written to:

Consumer involvement in Cochrane is based on three broad concepts:

(i)    It promotes transparency, accountability and trust in the way that research is produced
(ii)    It results in evidence that addresses consumers’ needs, reduces waste in research, improves the translation of research into policy and practice and ultimately leads to improved benefits for health systems and outcomes for patients
(iii)    It is consistent with current health research approaches and is expected or mandated by our funders, partners and consumers. Increasingly funders, publishers and users of research expect, and often instruct, researchers to involve consumers in their work. For example, the UK National Institute of Health Research, Canadian Institute for Health Research, Australian National Health and Medical Research Council and the Consumers Health Forum of Australia, Consumer and Community Involvement in Health and Medical Research, PCORI and others have statements and expectations about the involvement of patients in research. Cochrane is a part of the same network of organisations and needs to show its practice is up to date

Consumer involvement in Cochrane dates to the start of the organisation in 1993. Consumers are involved in a wide variety of ways, including working with Cochrane’s authors, Review Groups, Fields and Centres.  Many consumers involved in Cochrane are part of the Cochrane Consumer Network. This is a growing community, currently more than 1,500 people.  Cochrane consumers are represented in 79 countries. On average between 300 and 500 consumers regularly contribute to the review process in any 12-month period, most commonly by commenting on protocols, reviews and plain language summaries.

The Consumer Structure and Function Review 2015

The Consumer Network Executive undertook a Structure and Function Review in 2015. The review showed that the way consumers are currently involved in Cochrane varies significantly across the organisation’s Review Groups and Fields. A key recommendation from the Review was to establish a Statement of Principles for Consumer Involvement in Cochrane.

"They fund, are the intended beneficiaries, and are partners in the matters Cochrane investigates. So it's a moral and human right.” (Cochrane Consumer)

To address these concerns, in 2016 the Consumer Network Executive prepared the Consumer Delivery Plan to 2020. The plan sets out 8 key priorities for the development of consumer involvement in Cochrane, and an active programme of work which is already addressing many items identified in the Statement of Principles. The Plan identified as its priority the need to “Develop and adopt a statement of principles about consumer involvement in Cochrane” and this statement should be seen in the context of the broader programme of activity presently underway to support consumer involvement.

“Medicine is there to benefit patients. The priorities, desires and interests of patients should be central to all of medicine.” (Cochrane Consumer)

How the Statement was developed

The Statement of Principles has been carefully developed in an open and collaborative process involving a range of Cochrane’s stakeholders. A task group was established in April 2016, consisting of authors, consumers and others. The draft it developed drew heavily on established policy and practice from Cochrane’s funders and users of its evidence, with the final draft completed in September 2016. It was then sent out for consultation, with a link to an online survey from 6th October 2016 until 31 December 2016. The consultation was extensive and included posting on Community and Consumer websites, blog posting, a range of internal community bulletins including the Fields, Co-editors and Review Group digests, direct mailings to Cochrane’s consumers, a workshop delivered at the Colloquium, Seoul, and extensive use of social media especially Twitter and Facebook. Over 60 people actively and entirely positively responded to the consultation and the draft has been amended where possible to acknowledge their responses. Their participation in the consultation is gratefully acknowledged.

“I believe it is important to have such a statement of principles for Cochrane to be reminded of, aspire to and ultimately to be accountable for. Who is Cochrane for, if not consumers?” (Cochrane Consumer)

The Statement of Principles for Consumer Involvement in Cochrane can be downloaded as a pdf here.